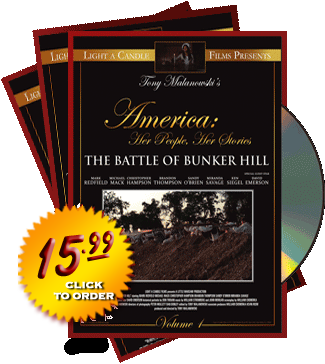 The Battle of Bunker Hill DVD

“The cinematography is breath taking in certain outdoor shots.”
–iMOM.com

“This drama reinforces the concepts of courage, conviction and commitment necessary when the defense of liberty comes to military confrontation.”
–The Old Schoolhouse Magazine

“…a good program for families with young children to engage them in history.”
–Frontier Battles

THE BATTLE OF BUNKER HILL is the story of the first major conflict of the American Revolution, and how two fathers and two sons left their farms, and joined the battle to defend the heights overlooking Boston Harbor. Through an innovative blending of epic recreation, historical commentary and vintage imagery, you will learn about life during that time, as well as the reasons why our Forefathers chose to rebel against the mighty British Empire and forge a new nation, conceived in liberty and freedom.

THE BATTLE OF BUNKER HILL is the inaugural DVD in the series AMERICA: HER PEOPLE, HER STORIES. Using an innovative blending of epic recreation, historical commentary and vintage imagery, you will learn about life during Colonial Times, and see why the Original Patriots chose to rebel against the mighty British Empire! You will experience the heroic stand of the American Colonists against the King’s superior forces, and appreciate their courage and sacrifice as they fought for their rights and liberties!

Not Rated – recommended for the whole family (some battle scene imagery may be too intense for younger viewers).

There are no reviews yet.

Only logged in customers who have purchased this product may leave a review.